How often do we get to say we won? The powers that be seem to have listened and changed their plans.

In a remarkable few days, the government found more FM frequencies for RNZ’s youth network, and RNZ have put on hold their proposal to sack RNZ Concert staff and relegate the station to AM. Congratulations to RNZ and the government for listening!

And congratulations to everyone who wrote to an MP, signed a petition, commented, tweeted, offered their legal services and generally caused a ruckus for RNZ Concert.

It’s a sign that people power does work sometimes. And how worth it? Instead of irreparable damage to RNZ Concert, we’re in the hopeful position of keeping it AND getting a youth radio network on FM for our younger generations.

The Better Public Media Trust has been part of that ‘ruckus’, vocally defending RNZ Concert on RNZ News and across the media, and we quickly setup the Change.org petition which is still active.

But before we get too relaxed, there is a chance that RNZ Concert is still not safe.

RNZ Concert staff are apparently still concerned about future plans as management go back to review their options.

The government have helped with FM frequencies, but RNZ also needs the funds to maintain Concert while establishing the youth network.

Better Public Media are working with the organisers of the Avaaz petition and the Save RNZ Concert Facebook page, to keep the pressure on!

We are all encouraging everyone to sign the Change.org petition which is directed at government. We need to make sure Cabinet completely understands how important RNZ Concert is to New Zealanders.

So please go to www.change.org/saveRNZConcert and sign the petition, and please please also forward it around your networks.

Let’s keep the momentum alive to ensure quality radio for all into the future. 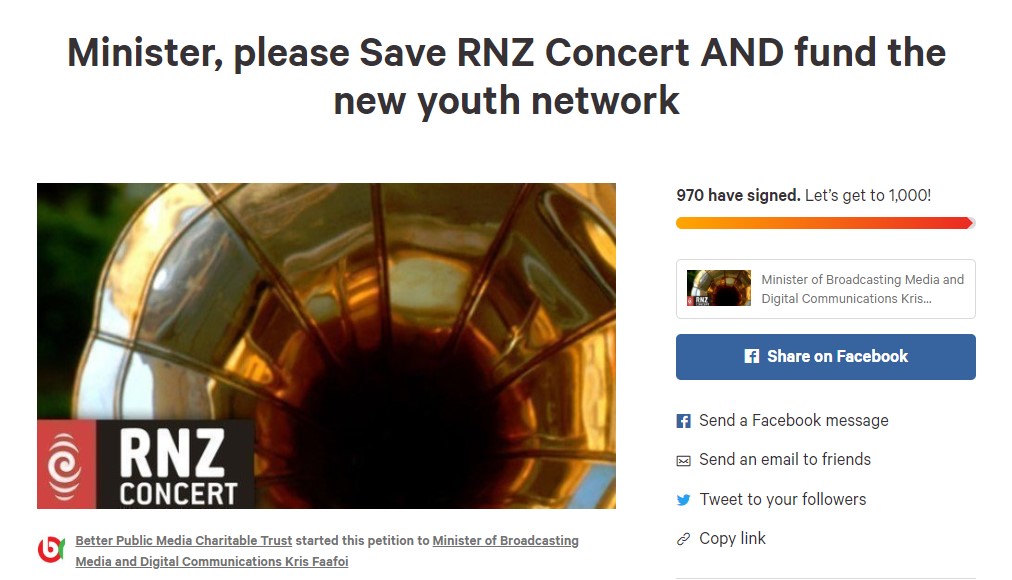 RNZ Concert has a special place in the hearts of many New Zealanders of all ages.

We're calling on the Minister of Broadcasting, Media and DIgital Comunications, Kris Faafoi and RNZ to keep it alive.

The proposal to sack the announcers and make RNZ Concert a music only station, available only on AM, Sky TV and online won’t work. It’s dreadful to listen to classical music on AM. And many RNZ Concert listeners don’t have their computer setup to listen to music, or their TV, or in their car.

This decision affects 170,000 regular listeners, but it also affects their whānau and friends, who care about them. We all deserve better.

At the same time, we understand why RNZ want to setup a youth music channel. Young people deserve non-commercial radio too. Why should they have to listen to noisy adverts and endless interruptions? It’s long overdue.

RNZ tried to make the Wireless work as an online only youth website - but it's not enough. They need to an old-school radio network, like Triple J in Australia.

It may be too late, young people often listen to music via streaming websites like Spotify so it may be that not many young people will bother with radios. But radio is still everywhere, and not showing any sign of slowing down like TV and newspapers.

And although there are zillions* of commercial radio stations for young audiences, they're almost all mediocre, unimaginative, spirit-sapping, banal rubbish. Our youth are our future, and if we want them to grow up with intelligent, open, enthusiastic, hopeful outlooks - we need to give them Kiwi radio stations that inspire and inform.

Why must it be either-or? Surely RNZ can provide FM services to more than just one music type?

We're calling on Kris Faafoi to provide the funds RNZ would need to keep RNZ Concert alive AND setup the new youth network.

Of course it will cost more, but we think it's important.

Governments of other developed countries with similar populations do much more for their people:

So please sign the petitions, email your MP and keep an eye on our Facebook page or the many other pages that have sprung up to protest RNZ's decision.