Our only non-commercial broadcaster is a bastion of intelligent, balanced, informative and entertaining programmes.

But Radio New Zealand suffered under a frozen budget from 2008 to this year. While inflation rose the broadcaster had to cut costs, sometimes unable to replace staff lured by better pay elsewhere. Finally this year, the Government increased RNZ funding by $2.85 million for the next four years. That brings RNZ's budget in line with inflation in 2011.

It's criminal because NZers repeatedly demonstrate their appreciation for our last public media broadcaster. RNZ National is more listened to than any other station in NZ and one of their broadcasters keeps winning national and international awards for her Saturday morning show.

Instead of RNZ being limited we'd like to see it grow:

These ideas might seem ambitious but overseas the BBC, ABC and CBC provide many niche radio stations to meet the diverse needs of listeners.

The BPM calls for ring-fenced government funding of public broadcasting institutions. It is vital that politicians cannot (and are seen to be unable to) influence the news-reporting capability of an 'unfriendly' news outlet. We also recommend independent reviews of funding levels to ensure it remains sufficient into the future. 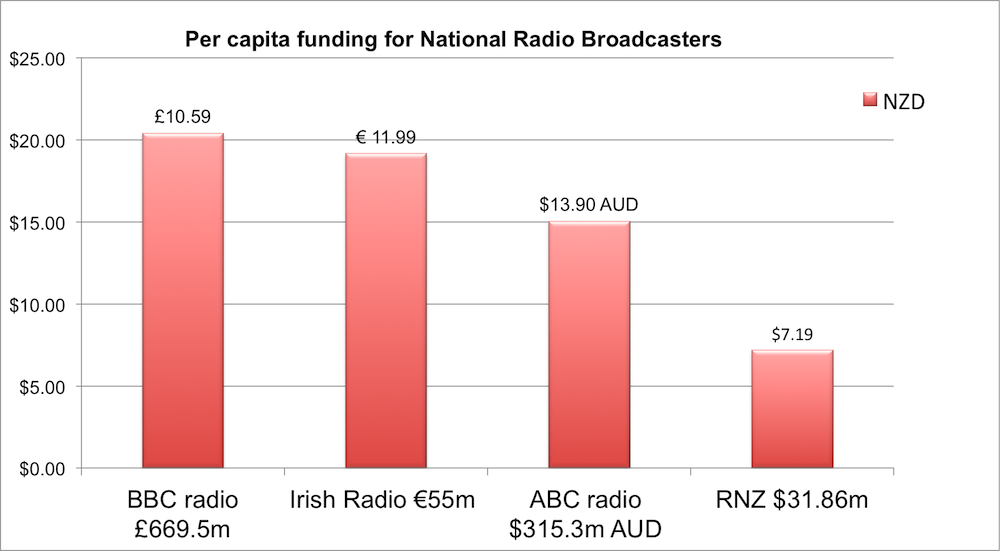 Here in NZ, we get what we (don't) pay for. Ireland's RTE provides 6 different stations for a similar population to NZ, Australia's ABC has 5 national networks  and 9 local stations and we won't even go into the BBC's extensive radio network.