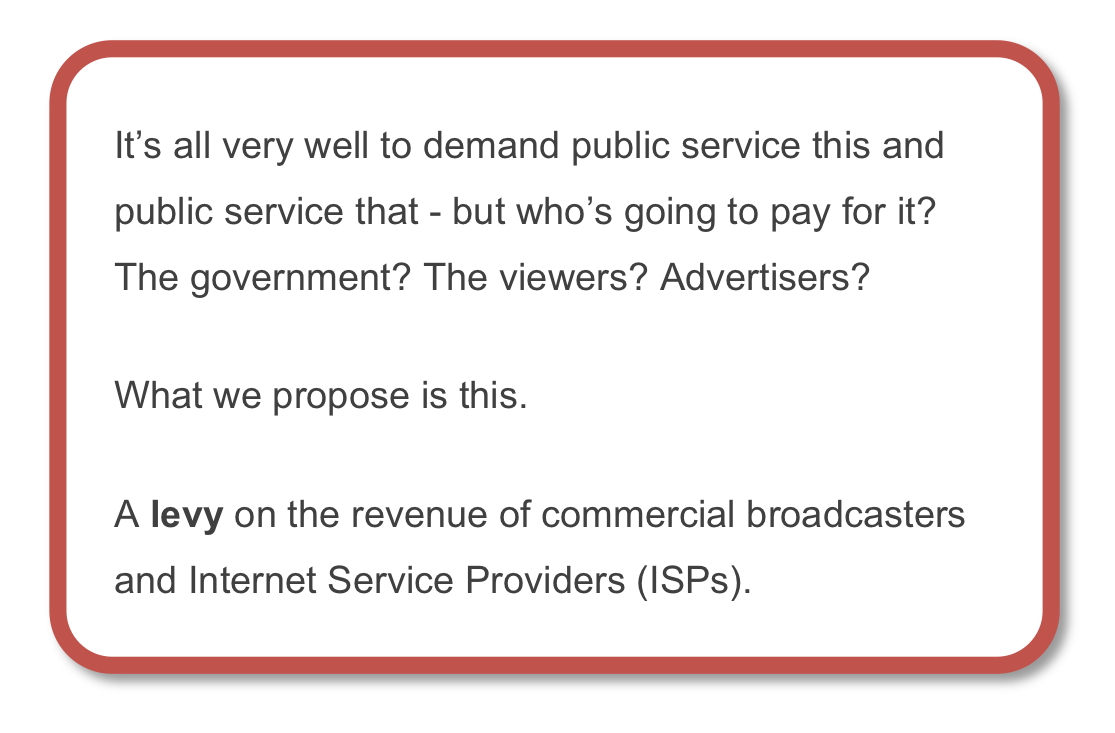 A levy is simple, cost effective and would work

A levy would require commercial broadcasters (SKY, TVNZ, Mediaworks) and Internet Service Providers (Telecom, Vodafone, Orcon etc) to pay a tiny amount of their revenue to a fund that is then distributed to public media. This would be:

This idea is not new. Levies already work well in many countries including France, Spain, Ireland, Estonia and Australia. In the UK Channel 4 was established with a levy on the ITV network. In fact broadcasters in NZ already pay similar levies to fund the Broadcasting Standards Authority and Radio Spectrum Management at MCH.

ISPs already pay a levy too, the Telecommunications Development Levy (TDL), established to part fund rural UFB rollout and mobile coverage. This levy raises $50m from ISPs proportionate to their revenue. Some ISPs pass the levy onto their customers as a $1 fee on their monthly phone or internet bill. Not surprisingly, there's been no public outcry about a $1 levy on people's internet bills when we all pay far more substantial levies elsewhere.

Whether it's a new levy, or an extension of the TDL, it makes sense that ISPs and Telcos fund public media because they are among the companies profiting from the shift to digital media.

Facebook and Google could also be included in a levy, or a tax on the earnings of foreign companies operating in NZ.

We have to stop thinking of TV and online media as just a commodity – it's part of our culture. In the same way our parks and beaches are public spaces, so too are our broadcast and online spaces.

and our commercial broadcasters should all view it as a privilege to operate in New Zealand's cultural space – a privilege that comes with an obligation. If they operate profitably in this space - sometimes at the expense of our culture - we value that obligation at a modest 1% of their revenue. It's a snip!

Besides, a levy is unlikely to affect company profits. As with the TDL, that 1% levy would probably be passed on to customers.

Some might complain that it's unfair for mainstream audiences to subsidise niche content. But public media is not niche. Look at the BBC - gameshows, reality TV and TopGear. Public media is about ensuring a range of genre and subjects are available for the audience – something for everyone, serving the public.