This is about Rupert Murdoch... 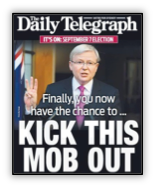 Some newspaper owners like to control what their newspapers say and the more newspapers, television channels, radio stations or news websites they own, the more influence they have.

We may think this would never happen in little old NZ. How about Australia?

In 2013 Rupert Murdoch owned a whopping 70% of Australian newspapers, and all of them were fanatically critical of their PM, Julia Gillard. This contributed to Gillard's low polling and despite running one of the most successful economies in the world, she was replaced by Kevin Rudd.

This corruption of democracy puts enormous power into the hands of someone with an axe to grind, and no ethics. And there is nothing to stop it happening here in New Zealand.

Although BPM regards non-commercial public media as essential for serving the public, commercial competition still plays an important role in the overall shape of the media environment. Commercial media can provide some excellent content forms and often help extend the range of choice for consumers. But ensuring healthy competition in rapidly-evolving digital media is a significant challenge.

Convergence has blurred the traditional boundaries between previously separate media sectors and many media operators are seeking to secure audience, subscribers and advertising revenue by expanding their business models into new sectors.

The ‘Rogermonics’ reforms in the late 1980s saw New Zealand’s media sector transformed into one of the least regulated in the OECD. There are:

With the exception of some modest public broadcasting and local content subsidies, the policy framework since the 1980s has implicitly assumed that media market failures can be best off-set by promoting and removing barriers to investment and market competition.

Competition laws were relaxed in the 1986 Commerce Act, which also established the Commerce Commission to enforce consumer protection laws and provide anti-trust oversight of markets. Although it does have statutory powers to enforce its role, the Commission emphasises market competition as a mechanism for serving the long-term interests of New Zealand consumers, whereas the previous 1975 Act emphasised a broader conception of public interest. In that respect, the 1986 regulation could be regarded as pro-market re-regulation premised on a more commercial belief of consumer interests.

The Commission’s interventions in media markets through the 1990s suggested a default tendency to accommodate market incumbents, especially when market power accrued incrementally, rather than through a single major transaction. Particularly after the 1987 financial crisis and the ensuing recession, the prevailing policy agenda prioritised further reduction of state-ownership and public spending while incentivising greater foreign investment.

The outcome for most sectors of the New Zealand media market has been the development a primary duopoly with a handful of peripheral competitors.

For example, Spark and Vodafone in the telecommunications sector, TVNZ and Mediaworks in the free-to-air television sector, NZME and Mediaworks in the commercial radio sector, and Fairfax and NZME in the print/online news sector. Indeed, the current competition legislation has not deterred market incumbents from pursuing further mergers to increase their market power. The recent attempts by Vodafone and Sky and also NZME and Fairfax to merge their operations would have created consolidated media companies with enormous market power across multiple platforms.  The problem with such mergers is that they could allow the consolidated media company to exert its market power in ways that make it very difficult for smaller competitors to enter the market and survive, by controlling so much content that they can increase retail prices without repercussions, or exert significant control over the sorts of content available to the public (which is especially significant in the case of news). The Commerce Commission declined these proposals but recognises the need for more robust competition legislation and has itself written to the government recommending that competition legislation be tightened up.

Anti-competitive agreements are also considered illegal under other sections of the Commerce Act. These include:

A substantial lessening of competition is more likely to occur in markets where the agreement:

The Commerce Commission can authorise an anti-competitive agreement where it is satisfied that the benefits to the public outweigh the harm of the agreement. This does not have to be proven – relative probability is weighed up. The Commission’s general principle is to compare the factual scenario (the merger proposal or contractual arrangement) with the counter-factual scenario (the likely outcomes if the merger/contract does not go ahead).

One of the difficulties with the current framework is that the complexities of a fast converging media market make it difficult to evaluate the relative benefits and detriments of different market scenarios. Indeed, in the recent NZME/Fairfax case, the applicants tried to argue that the Commerce Act did not permit questions of public benefits like editorial independence, plurality and quality to be factored into the Commerce Commission’s deliberations, suggesting that such matters were the sole concern of government, not the private sector.

BPM therefore takes the view that a broad civic conception of the public interest needs to be asserted in all relevant media legislation and that the notion of public benefits and detriments in competition law should encompass factors relevant to the New Zealand public both as citizens and consumers.

BPM calls for a review of policy and legal provisions affecting market competition in NZ media, domestically and internationally, including: