Survey shows television without adverts could be a vote winner

Television news focuses too much on politicians' personalities and not enough on the real issues, according to a UMR survey commissioned by the Coalition for Better Broadcasting.

Political news on television focuses too much on politicians' personalities and not enough on real issues.

To get an advert-free television channel, I would be willing to pay 20 cents per week which is roughly 10 dollars per year.

"More than a third of New Zealanders are so dissatisfied with existing coverage that they would be prepared to pay for a better quality, non commercial television, such as TVNZ 7."

The UMR survey of 750 people shows that 40% of New Zealanders would be willing to pay the $10 per year required to establish an advert-free television channel, and less than half the respondents opposed the idea. This suggests in principle, that a TVNZ 7 type channel could be funded by subscription, although the CBB believes such a channel should be free-to air.

“That 40% confirms that the public's desire for non-commercial television is much stronger than the government claimed when closing down TVNZ 7, and that desire hasn't gone away.

The research reveals that over a fifth of all New Zealanders are more likely to vote for a party that promises a television channel without adverts.

“With both main parties admitting the election will be close, that represents a significant opportunity for parties that care about public service broadcasting," Mr Thomas said.

“In particular, our research identified that a staggering 11% of National Party voters would be more likely to vote for another party, if it was offering an ad-free television channel. Maybe National should reconsider closing down TVNZ 7.

"And well over a quarter of voters aged over 60 would consider changing their vote for an ad-free channel. That’s a significant chunk of a powerful voting bloc.”

“Obviously broadcasting is a hot issue for a lot of New Zealanders, and with a single percentage swing potentially making all the difference, broadcasting policy could be a game-changer.” 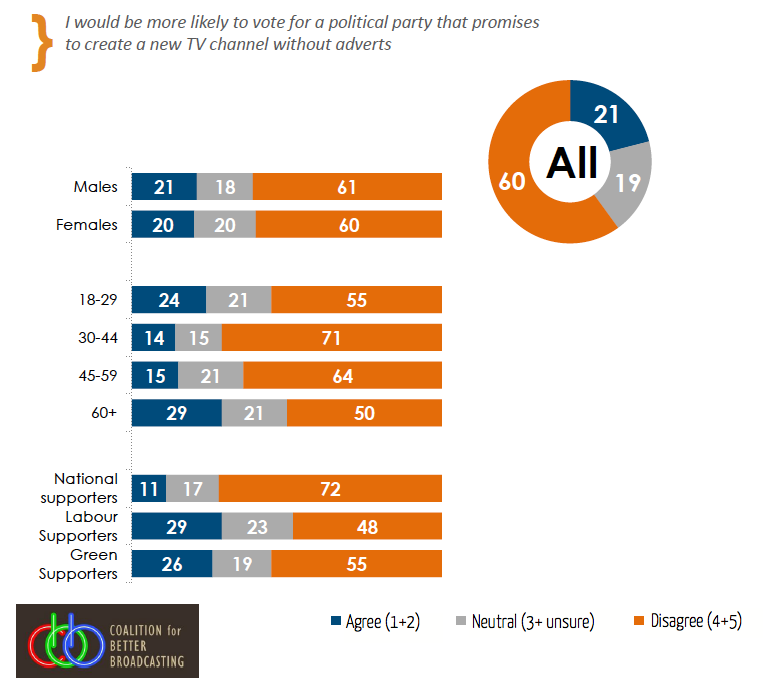 Which parties stand to benefit?

The CBB Broadcasting Policy Guide is based on responses to our questionnaire and published policies.

Labour, the Greens, NZ First and Internet Mana have all committed to establishing an ad-free television channel if part of the next government. These parties could see an upturn in support with the publication of these policies.

“It’s great that voters have a choice at this election to make a difference to NZ television. Perhaps they’ll take advantage of this chance to bring back a TVNZ 7-style, ad-free channel,” said Mr Thomas.